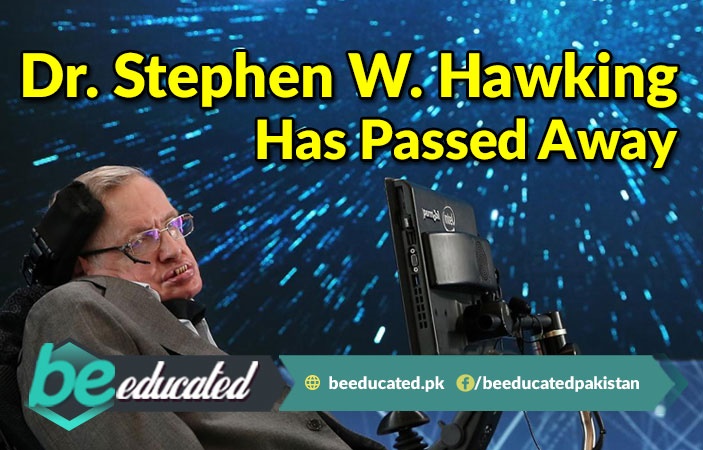 Stephen Hawking passes away at the age of 76.

The UK based renowned Physicist, Stephen Hawking, passed away peacefully on early Wednesday morning (14th March, 2018) at his home, in Cambridge. Albert Einstein, a name which needs no introduction as most people know of him and his achievements. Similarly, Stephen W. Hawking, is a name the coming generations of this world will definitely remember.

The famous and highly respected physicist worked in the field of Physics while exploring and discovering the secrets of Black Holes.

He published a book on cosmology (the study of universe) by the name ‘A Brief History of Time: From the Big Bang to Black Holes’ back in 1988. The book became a bestseller and sold more than 10 million copies in the past years. The success of the book was guaranteed as it was written targeting every layperson, meaning people who have no previous understanding/knowledge of scientific theories can get what he is talking about right away. His book discussed concepts of time and space, the basic forces that make the world go round like gravity, also the Big Bang and Black Holes. All of that and much more was talked about in his book leading to his final theory that everything in the world is working in a unified manner.

At age 21, in year 1963, Hawking got to know about a disease he was suffering with the “Motor Neuron Disease” (or MND). This disease as it progressed left Hawking unable to move and even speak. He was told he had only a few years to live. Yet to many people’s amazement we know that he was able to live a few decades and not just a few years. Dr. Hawking went around on his wheelchair most of his life and used a voice synthesizer to let people know what he wanted to say.

The esteemed Physicist did not just write scientific books but children books as well. With the help of his daughter, Lucy, he authored a series of books for kids featuring a main character George. Children books by Stephen Hawking told the interesting tales of George’s travel through space and time.

Hawking was a positive and brilliant minded person even though he was confined to a wheelchair for a long period of his life. He tried to live his life to the fullest even after being diagnosed with a terrible disease that left him paralyzed. Leaving behind three children of his own, all three Robert, Lucy and Timothy are saddened by their father’s death.

Dr. Stephen Hawking will be remembered for his most strange discovery, by answering the question:

“Is a black hole really black?”

He found out through his research that, against the widely believed black hole theories, a black hole is not really black. Black holes over a long time of period (eons) keep buzzing while leaking radiation and particles, in the end they finally explode and disappear completely.