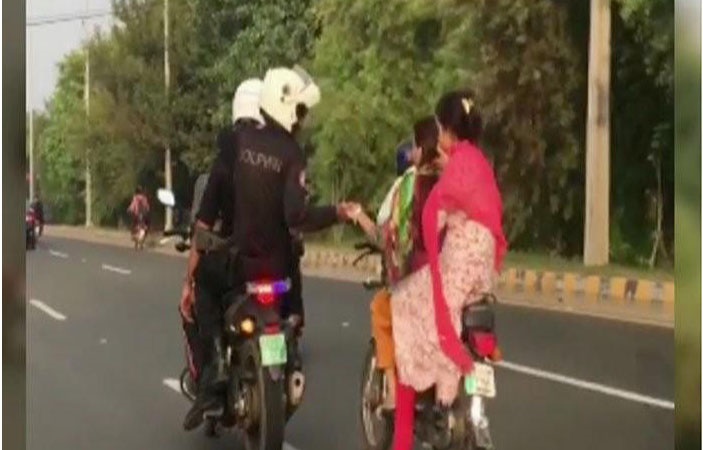 Lahore Dolphin force lent a helping hand to some female riders and the internet broke down in league with the girls’ motorcycle.

Recently, a video has gone viral, in which you can see members of Dolphin police helping out two female riders by trailing their motorbike.


But what’s garnering attention of most people is the ‘helping hand’. As one of the Dolphin force member holds the female riders hand to keep them close and assist them in reaching a workshop or specific destination without any problems.

Numerous people have seen the video by now, and the views just keep on racking up. However, every person watching the video has his/her own view about the situation. As some are applauding the efforts of the officials while others are condemning the act.

Talking about public’s discontent, SSP Dolphin Nadeem Khokar said, “The girls asked for help on their own. (So) there is no gender discrimination when it comes to helping (others).”

BeEducated.pk wants you to know that people are still giving mixed opinion on this simple act of humanity. As the social media users took on twitter to relay their view about the matter in the following way:

This apparent act of helping motorcyclists by Dolphin force officers could have resulted in a fatal accident due to minor imbalance. Both female riders not even wearing helmet. Having faced many motorcycle accidents myself, I know how dangerous this ride can get. pic.twitter.com/f7MZCGTDHk

The girls bike broke down and thy requested the dolphin force for help to take them to the nearest workshop ...thy were just doing their job. NICE GESTURE. 👍

So, keep visiting our website as much as possible to get latest news on Pakistani national affairs, educational developments and much more.