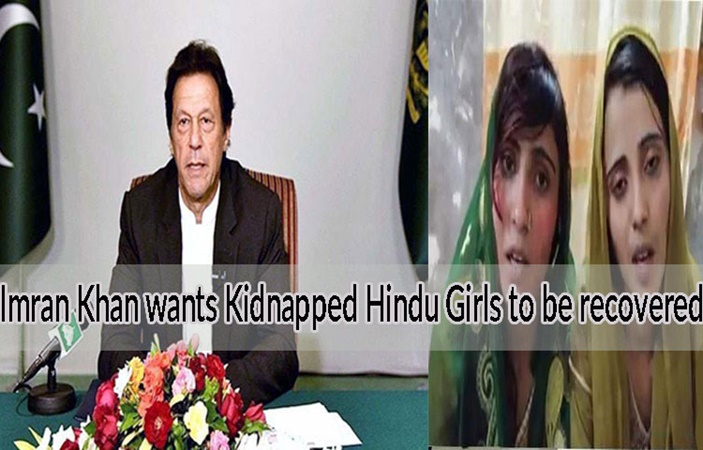 The Government of Pakistan Tehreek-E-Insaf (PTI) stands with the community of Hindu on the abduction of two Indian girls in Sindh.

Two hapless Hindu girls from Multan, Pakistan who were allegedly abducted, issuing an appeal to protect them from fundamentalists This reports comes after abduction and forcibly conversion of Reena and Raveena in Sindh, Pakistan . @ImranKhanPTI @fawadchaudhry @SushmaSwaraj pic.twitter.com/emKOxE0t2x

The incident was highlighted when the brother and father of the girl’s full-hearted pleas on social media, that the sisters were kidnapped from Ghotki, and forcefully were converted into Islam.

In a news conference, The Minister said the girls were kidnapped from Sindh and reportedly taken to Rahim Yar Khan, and then to Gujranwala. The Sindh police had made some arrests, while we are trying our best to rescue the girls.

“The white colour in the national flag represents minorities, and the sanctity of the flag can only be maintained when the white is equally respected along with the green,” he said, quoting the Prime Minister. “The PTI government under the leadership of Prime Minister Imran Khan is transforming Pakistan into Quaid-e-Azam’s Pakistan — where minorities are secure and all the citizens have equal rights.”

In a twist of events, the sisters reached the court in Bahawalpur on Sunday and sought protection from their family, seemingly contradicting their family’s claims that they were kidnapped, forcefully converted to Islam, and wedded off under age. In a separate viral video, the girls are saying they accepted Islam by their own concern and looked relaxed.
Read More News: Israel behind the Pakistan and India quarrel