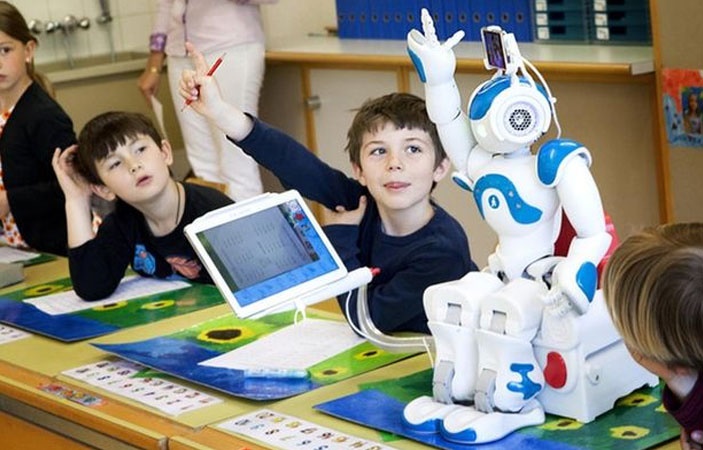 As such the time is running with speed of light, like it technology is renewing with unconditional speed. As telephones, post letters, deck, watches and many other slow processing things are replaced by smart phones and still the game is on as companies are renewing technology to most advanced ones, it is also heard that a time will come when man will be replaced by intelligent machines.

So as the technology is introverting in our lives hence a time will come when we will get inspired by machines instead of inspirational human being.

Let me take you to the point it is observed that in coming 10 years near future, such intelligent machines will be set up in which we instead of the teachers will be replaced by smart machines. This has been predicted by one of the Britain’s famous public schools.

Sir Anthony Sheldon, who is the master of the Wellington College believes that within 10 years a revolution in technology will sweep away old notions of education that will change the world forever.

School teachers will only be consider as the classroom assistants while losing up their roles effectively. These assistants of classroom will only maintain the discipline of the class and set the equipment while helping the children if necessary, Sir Anthony said.

Artificial computers will install knowledge in young minds. The human life will change as we know, said by the historian and political commentator, Sir Anthony.

Now consider that how little minds be eradicate in such scenario. What effects will contaminate in their mind if their starting light up through machines! I think such generation hearts will be manipulated by stones with no feeling of affection towards human beings but towards machines only.

According to perception if this prediction will ever be happen in our life then it will definitely bring life towards threats as it will be no longer far safe.

According to Sir Anthony statement, “These are adaptive machines that adapt to individuals. They will listen to the voices of the learners, read their faces and study them in the way gifted teachers study their students.”

Here is my argument against the statement, a machine is made by man and the motivational roles endure in it will be done by man’s perception.

Let me tell you if machines are man’s friend then they are also man’s enemies. If they help us they could explode us too. How you know that the intelligent machine memory such if manipulated by wrong brain could harm the young brains through wrong encyclopedia. A machine can be decayed too and it can also offensively be misused. Furthermore, a good advice cannot be given by machine. A love and affection given by teacher to its student cannot be replace by machine's love.

Furthermore these machines if they will be more inspirational they have more disadvantages too including as it would take many jobs away. The rise of employment will occur all will turn towards technology all hang towards the booth of technology no one would hope to become a teacher again. In this way the lovely affective relationship would end. However, if it would be advantageous than on the other hand it would also lead towards devastation.

I don’t know why, but I am afraid of this kind of revolution for our coming generation.