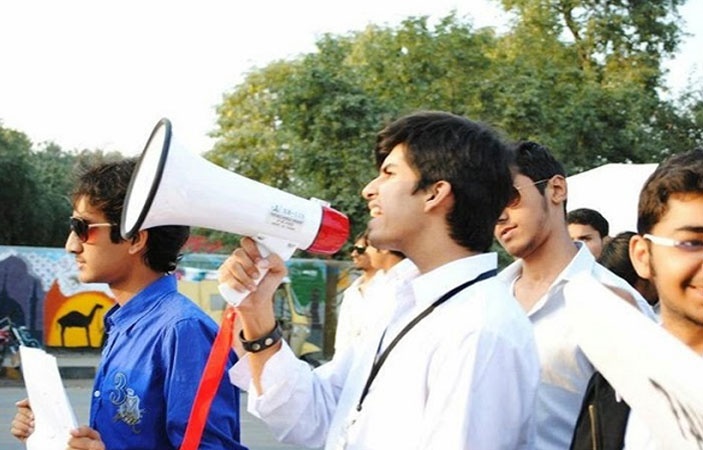 Rohayl Varind is the Pakistani social activist and social entrepreneur who is a no stranger anymore in the country. He has been working constantly for the betterment of unprivileged people in Pakistan after he hitted the headlines for winning the World Youth Summit awards in 2015 at Sao Paulo, Brazil.

“Wall of Humanity” was the concept by Rohayl who brought it up, last year, after he got inspired by the Iranian “Wall of Kindness” to the street of Faisalabad.

Wall of Humanity invites the people to donate anything they don’t need to the needy people as the people place the stuff near the wall for the poor ones, so they can collect the thing easily from here.

Rohayle weekly also organizes an event at the Wall of Humanity in which needy people got free medical checkup, medicines, food, rice, milk and wheat all for free.

This 21-year-old boy is dedicating his efforts to his very own slum school. As it was started in December 2016 and now his very own school is attended by more than 30 children.

In the slum of Faisalabad, apart from basic education they are also taught basic etiquette and ethics with free provision of food bags, stationary and books.

Rohayle was approached by the World Summit Awards as they were impressed through his effortsand there he was honored with the opportunity to represent Pakistan at global level.

For so now, “Rohayl has now been selected as the Youth Ambassador and a member of the Youth Jury Panel for the World Summit Awards.”

“I feel honored that I am representing Pakistan internationally at one of the world’s biggest forums,” – Rohayl.

He is now ready to attend the World Summit Awards Global Congress and Winner Ceremony that is going to be held in Vienna, Austria, in 2018 from 20th to 22nd of March.