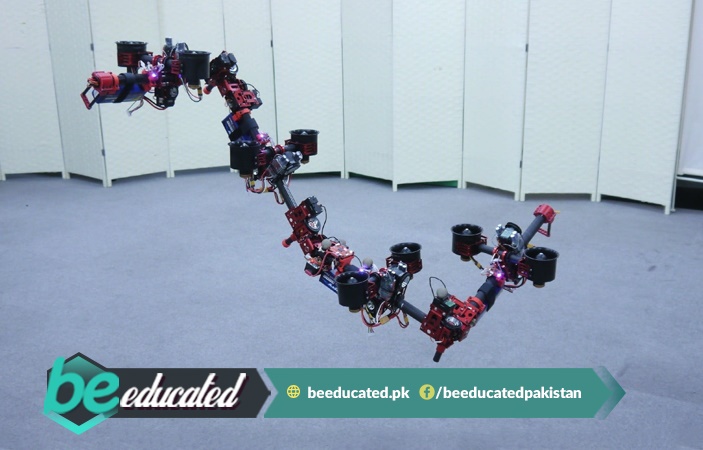 People are amazed to know about the Japanese made new drone that can change its shape while flying. According to various sources, the research team at the JSK lab (University of Tokyo) has developed a drone, named DRAGON, which is capable of flying and changing shape midair.

BeEducated.pk is posting this news, as we want people to know about latest inventions and innovations. This new drone is designed for indoor flights, where it can change into any shape required for flying inside a room among different obstacles such as walls, doors, windows, people and furniture etc. Also, it does not need any external commands to transform as it is smart enough to decide its shape according to the given space.

Many people might think the new autonomous drone bot is called DRAGON, because it is designed after traditional dragon kites. But that’s not the only case as DRAGON stands for ‘Dual-rotor embedded multilink Robots with Ability of multi-degree-of-freedom aerial transformation’.

The drone is able to fly with the help of ducted fans, which are installed all over its body and can be adjusted to provide vector thrust in almost every direction. Intel Euclid Dev kit handles all the processing, while a battery is attached to its spine that allows it to stay in the air for three minutes.

The most basic application of the DRAGON drone is to navigate small spaces, however its creators have many bigger goals. They plan on adding up to 12 modules and use it as a flying arm that can interact, move or manipulate objects. The innovative drone might be used to pick up things, if it connects both its ends like human hands.

Even though the DRAGON drone is an interesting technology, its actual uses are still unclear. An assistant professor at University of Tokyo Moju Zhao told the media, “We will (now) move towards designing a ‘multi-legged’ model with our basic link module. Then the robot will be able to walk on the ground and not just fly.” He also said, “Such autonomous decisions about movement according to the environment is an interesting research. Our ultimate dream is to make a flying humanoid, similar to the unmanned Iron Man.”

Robotics are being involved in almost everything now a days. Recently, a Pakistani startup company RADA technologies even introduced JALBOT, a chef Robot that manufactures Jalebi. So, to keep on getting various interesting news visit our website on daily basis.