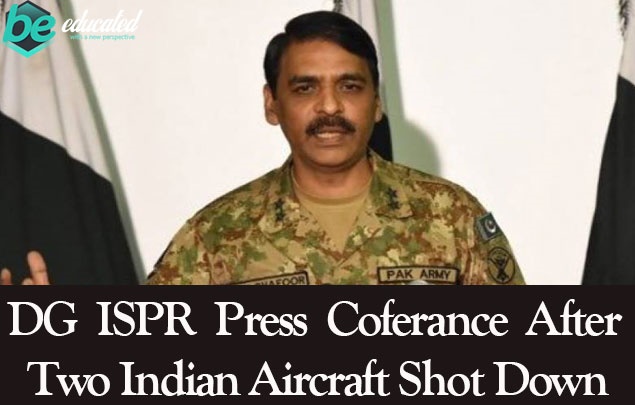 DG ISPR Major Asif Ghafoor held a conference about the Indian Air craft incident. According to DDG ISPR, Before we were targeting Indian Air crafts we made sure that we won’t destroy any military sources and nor we will avoid collateral damage. Then our air force stayed in there limits and locked six targets after that we looked for a barrel land there we strike at the targets. We have capabilities of will resolve. So we didn’t do any stupid thing. We can do anything for the sake of region we are still offering a hand of peace. The retaliation is not intrusion. Prime Minister Imran Khan, Civilians and Army is always offering peace with India, we don’t want any kind of war and violation.

We strike two Indian aircrafts as soon as the violated LOC, One just fall on our side and the other one was fallen in their territory. The Indian Pilots were arrested at the spot; both the pilots were in a bad position. So for the immediate recovery there were send to CMH hospital for medication. The Action we took we don’t want this to be known as victory, we did it in self defence.

Asif Ghafoor says, the Indian news channels are telling that they shot down Pakistan’s F16, DG ISPR says first of all we didn’t use any F16 Jets in this Strike. We the Pakistan has always conveyed the message of Peace to India and root to convey the message of Peace is Dialogue. Both countries have the capabilities and capacity to understand, but India fails to understand this and leads to war. As Prime Minister has stated

“Its easy to start a war, but no one knows where the war is ended”

We still don’t want to escalate, but we want peace. The people of both the countries and the people of region have all the rights to live in peace. War will only lead to destruction. India should think about this with cold mind.

In the end I would say that we were offering peace, and we will always offer to peace in region and to our neighboring country.