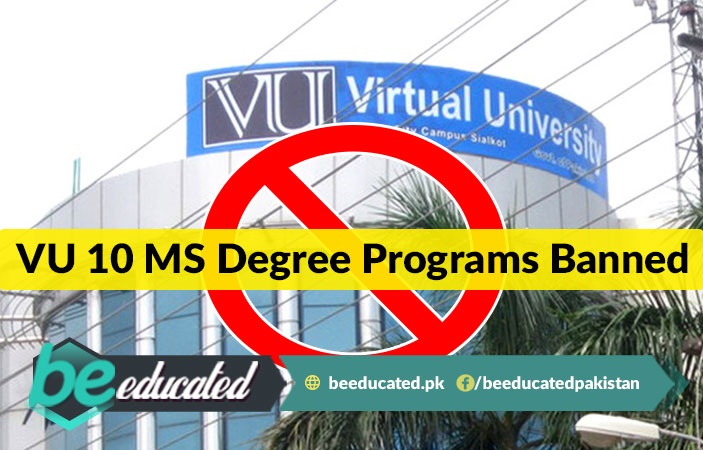 There are not many literate people found in Pakistan, with only a literacy rate of around 58% (according to a survey conducted in 2016-2017). Almost half of the population is still not getting the basic right to education. Now among the students who have obtained higher education, they got to hear this sad news in the morning of 15th March 2018:

“10 MS Degree Programs of Virtual University have been declared illegal!”

This news came as a great shock for the graduate students of Virtual University. According to the news channel Virtual University’s 10 degrees of Master’s offered in various fields have been declared illegal and further enrollment in these programs is to be stopped.

Team of BeEducated.PK, brings you the degree programs banned in Virtual University, which are as follows:

Graduate students who graduated, or are graduating, from Virtual University with the above mentioned degrees must be very disheartened now. There are thousands of students who have graduated with these degrees and now they have no way of claiming that they are graduates. As soon as a degree gets declared illegal the student with that degree has to once again apply for the same degree in another university to become qualified.

Virtual University is a trusted university and has the acknowledgement of HEC (Higher Education Commission) but now this has happened leaving many graduates and graduating students with no hope of being called a Graduate (Master’s) Student.

Many graduates must be working for companies with minimum requirements of Master’s and their employers may review their employment. Same goes for the people who took admission for further studies on the basis of their Master’s Degree from Virtual University which is now discredited. This can lead to their expulsion from their study programs of MPhil and/or PhD.

There are lots and lots of universities being discredited (declared illegal) by the HEC on yearly basis. But such an event can happen to a well-known institution is just a big shock. Pakistan’s education system has been criticized by many people but nothing much has been done for its betterment. The same things keep on happening over and over again.

We will keep on raising our voice against such negligence in the Education system of Pakistan until we start to make big changes for its development. BeEducated.PK updates you with all the latest news of the Educational Sector of Pakistan, so keep on visiting our site for more developments on such matters and more.