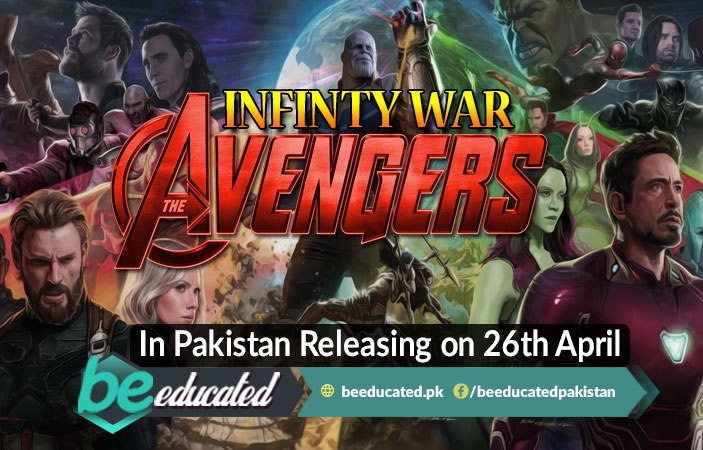 Yes! Avengers Infinity War is releasing Nation Wide this weekend on April 26. The latest part from Marvel Studios includes more superheroes than cinema has ever seen in one movie, and promises to tie together ten years of storytelling. Without giving anything away, the climax will blow away the minds of Marvel fans and no one will leave before watching the traditional teaser at the very end, which tells what’s more to come in the next part of the movie franchise.

BeEducated.pk brings you this latest entertainment news because we know everybody is trying to get a tickets to watch the latest Avenger’s Movie. We will bring you various entertainment, sports, and educational news. So, keep checking our website to read latest news and much more.

A cinematic journey that started ten years ago, Marvel Studios' "Avengers: Infinity War" brings to screens near you the ultimate and deadliest showdown of all time. The Avengers and their Super Hero allies must be willing to sacrifice all in an attempt to defeat the powerful Thanos (Villain) before his evil plan of putting an end to the universe succeeds.

Ten years ago this month, the Marvel universe was launched with the fresh, lively, relatively easygoing "Iron Man."
The Marvel Cinematic Universe's Avengers Infinity War is its biggest, most ambitious piece of storytelling in the studio's 10 years of existence and the minute you exit the theatre, you'll be lining up at the box office to buy another ticket. It's that good.

It looked like the movie will not live up to the expectations of its fans and a reported $300 Million budget, but it was worth watching because of cool action or battle scenes and an amazing ending.