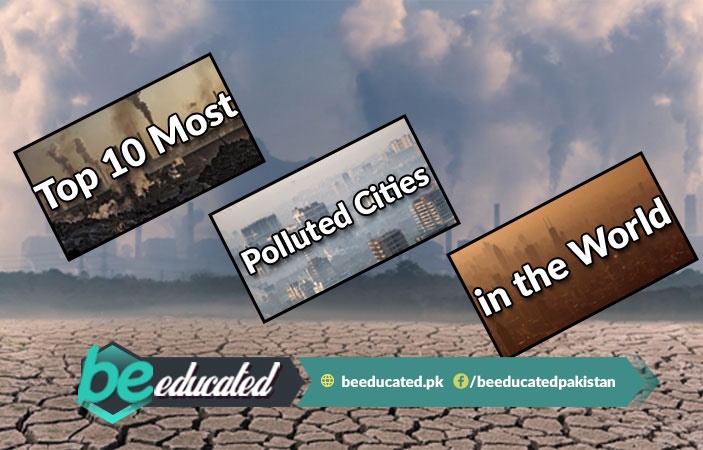 Two Pakistani cities can be found among the most polluted megacities of the world. According to Worlds Health Organization, 9 out of 10 people in the world are breathing polluted air, putting their health at enormous risk. Outdoor and household air pollution result in about 7 million deaths annually.

The World Health Organization (WHO) has called upon member-countries in its Southeast Asia region to aggressively address the double burden of household and ambient (outdoor) air pollution. WHO reported that each year the region, which comprises India, accounts for 34% or 2.4 million of the seven million premature deaths caused globally by both household and ambient air pollution.

BeEducated.pk wants you to know about the ten highest ranking polluted megacities of the world, which are as follows:

Children play in a cloud of dust, a primarily meteorological phenomenon in Zabol. Though naturally occurring, the dust storms are filled with particles that can damage human lungs in a matter of hours.

The residents of Allahabad deal with the perfect storm of pollution. Changing wind patterns, coal-burning power plants, vehicular emissions, and deforestation all leave this city, quite literally, in the dust.

The Saudi capital experiences severe sandstorms on top of the emissions from vehicles and industrial factories. The tiny sand particles are dangerous to inhale.

Peshawar is the 4th most polluted city in world.  Due to its industrial area which have many factories producing huge amounts of dangerous smoke.

This chemical factory in Hengshui might feed Hebei province’s booming economy, but it also contributes to the region’s dangerous levels of air pollution.

The old Blue City of Jodhpur is a popular tourist destination. But the constant lack of rain contributes to its poor air quality.

Some schools have snow days, but schools in Shijiazhuang have the occasional smog days because of the high air pollution in the city.

As recently as the 1940s and 50s, Dammam was a quiet fishing village, but the discovery of oil transformed this area into a hub for the Saudi energy industry, which lead to its increase in pollution.

This area of Pakistan is home to steel rolling mills, leather tanning facilities, marble factories and oil refineries. All of these industries can, under certain conditions, negatively impact air quality.

The Indian capital was once the most polluted city in the world. The city still struggles with pollution from the burning of nearby rice paddies, burning municipal waste, and vehicle exhaust emissions.