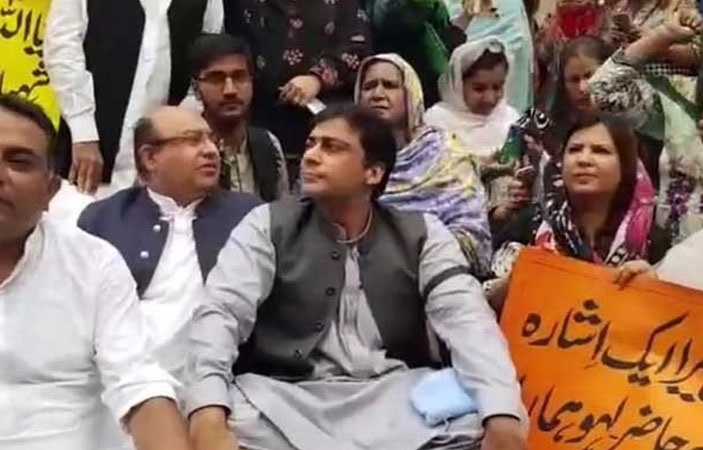 The PML-N members gathered outside the Punjab Assembly and protested against the arrest of their party’s president Shahbaz Sharif.


Assembly members of the N league tried to open the doors at first, but the police made their efforts useless. After which they entered the assembly’s premises by jumping over the barbed wires and breaking the barriers.

BeEducated.pk wants you to know that opposition leaders held their protest at the entrance gate of the assembly. Leaders of the Leagues led a sharp slogan against the government and made a protest against Shahbaz Sharif's arrest. The N League raised slogans against the government and staged an extreme protest. They were holding up placards which supported slogans like “Stop the Revenge Politics” and “Release Shahbaz Sharif”.

Khawaja Saad Rafiq addressing the protest assembly said that the current rulers have no relation with democracy as they are political fanatics. It’s for the first time in the history of Punjab Assembly thtat it’s doors have been closed on its members. He added that Imran Khan wants to create tension with the opposition and closing of the assembly doors is setting an example of dictatorship.

Hamza Shahbaz Sharif addressed the protesters saying that Imran Khan does not have the courage to listen to the elected members of the Assembly. This is not Punjab Assembly’s lockdown but the lockdown of the democratic system. He said we will all protest against these aggressive moves of the government and we will get the assembly doors open.

The PML-N leader said that Imran Khan should first be accountable for his own assets at Bani Gala and then start taking action against the poor vendors. He further said your senior minister usurped billions, the son of Punjab Assembly speaker remained in custody for NICL case, while Chief Minister Punjab Usman Buzdar paid bribes to get his name out of a murder case. Then he asked whether the Pakpatan case is the example of ‘Naya Pakistan’.

Maryam Aurangzeb’s Voice Over the Matter

PML (N) spokesperson Maryam Aurangzeb condemned the closure of the assembly doors and blocking of the way by putting barriers outside Punjab Assembly in her statement.

She said that stopping the Assembly members in such a manner only proves the government’s panic and undemocratic attitude. While she warned Speaker Punjab assembly and the government that they will be responsible for any and all chaotic situation, which can arise due to their aggressive politics.

Finally, keep visiting BeEducated.pk for more political news in both English and Urdu.