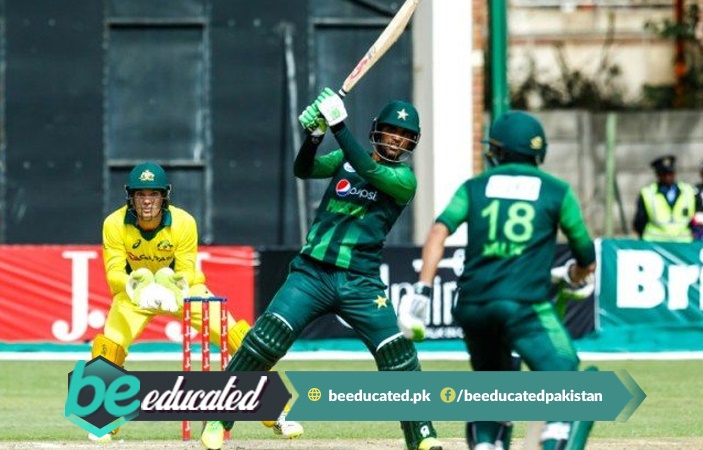 In Harare, Pakistan defeated Australia by 6 wickets in the final match of Zimbabwe T20I Tri Series.

Harare city of Zimbabwe, in the T20 series final, Australia choose to bat first and scored 183 runs, while the national team chased the target at the loss of 4 wickets. In the pursuit of Australia's target, the Pakistani innings was started by Fakhar Zaman and Sahibzada Farhan, but soon Pakistan had lost 2 wickets.

Opening Batsman Sahibzada Farhan got out on the second ball of the inning without making any score. Hussain Talat, who came one down, also returned to the pavilion without scoring a single run.

After the loss of 2 wickets on 2 runs, the national team got into a tough situation. However, Captain Sarfaraz Ahmed and Fakhar Zaman gave a tremendous batting performance by playing responsibly and increased the score. Both the players scored 45 runs in their partnership, as Sarfraz did 28 runs and got out.

After Sarfraz's departure, Shoaib Malik and Fakhar Zaman presented an aggressive game, both the players set up 107 runs, but Fakhar Zaman scored 97 runs and failed to complete his century.

Shoaib Malik performed in a stunning way to make 43 runs remaining unbeaten. Due to the aggressive innings of Shoaib Malik and Fakhar Zaman, Pakistan overcame the target of 184 runs on the loss of 4 wickets within 19.2 overs.

Earlier Australia won the toss and decided to bat first, where D’Arcy Short and Aaron Finch came as the opening batsmen, both the openers gave their team a confident start by scoring 95 runs.

Aaron Finch scored 47 runs on 27 balls while playing an aggressive innings, but he got caught by Shahbzada Farhan at Shadab Khan's ball. Darcy Short performed a wonderful game, as he completed a half-century and made 76 runs before losing his wicket.

BeEducated.pk wants you to know that after the openers got out, not one of Australia's players could stay on the wicket for a long time. Therefore, in the forthcoming overs, Australia could only score 183 runs on the loss of 8 wickets. Finally, to get latest news keep visiting our platform frequently.