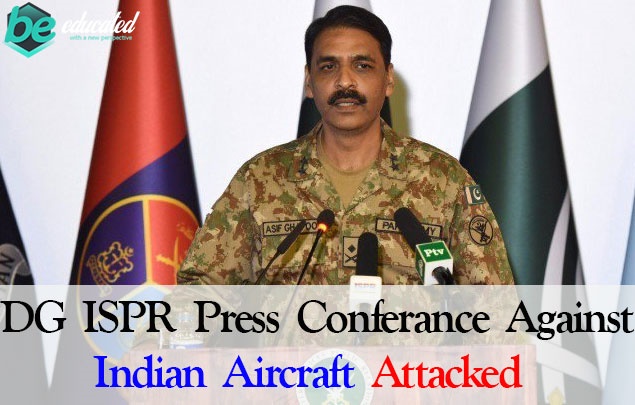 Indian military planes entered from Muzaffarabad and violated LOC on which Pakistan Air force took rapid action and Indian aircrafts ran back to their territory.
Major General Asif Ghafoor said in a tweet

"Today, the prime minister has asked everyone to get ready for every eventuality. We are all ready. Now it is time for India to wait for our response," he asserted. "We have already exposed India and will do it again so the whole world knows what exactly India wants."

India claims that they stayed in the Pakistan for 20 minutes and terminated 350 terrorists. They confess that the second strike was in muzaffarabad and the third in Chakothi.

Maj Gen Ghafoor challenged India and asked them to stay in Pakistan for 21 minutes, Allah Almighty is the greatest and we should not make tall claims. He Further Added “According to war methods, our whole Air Force couldn’t not have remained air bourne, The safe guards on land were well prepared if they try on ground incrusion, then they would met the reaction we have prepared.

In response to PAF strikes this morning as released by MoFA, IAF crossed LOC. PAF shot down two Indian aircrafts inside Pakistani airspace. One of the aircraft fell inside AJ&K while other fell inside IOK. One Indian pilot arrested by troops on ground while two in the area.

ISPR DG tells us about the Last Night Reaction Of India

Last night, our radars were observing them. They had earlier come closer to our border but did not cross. Last night, their first visibility was spotted near the Sialkot and Lahore border. They were seen approaching to the border. Our Combat Air Patrol  team reached there and challenged them. But they did not cross. "If they had struck any military position, then an engagement would have happened. But they did not do that because if they had done so, our soldiers were ready," he added. We are all ready. Now it is time for India to wait for our reaction.