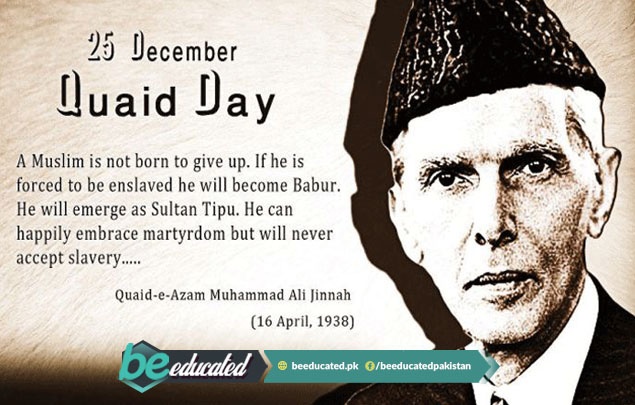 Quaid-e-Azam was born on 25th December 1875. During his childhood he used to work hard and shows talent in his primary and secondary education in Sind Madrasa-tul-Islam, Karachi. He went to England for higher studies afterwards and came back after becoming Barrister. There was not much business in Karachi in those days therefore he went to Mumbai to carve his successful career in Law. In starting he joined some service first but after then he started his career as legal practitioner.

Our Quaid a True Leader

Douglas Arthur quote about leader; “Leader stands alone and make tough decisions and listen others with patience. He works equally for all and becomes a leader and has intention to do something for others.”

If we see the quote then we see that Quaid-e-Azam is a true leader of us who has paved us the way to establish a nation for muslims of subcontinent and a separate home land where muslims can live a life according to their beliefs. Hindus of subcontinent had not accepted the Hindu-Muslim separation and establishing a country separate for muslims up to many decades after creation of Pakistan.
Imran Khan on twitter

Remembering Quaid-i-Azam Mohammad Ali Jinnah on his death anniversary. His vision for Pakistan is our guide today for Naya Pakistan.

Rattanbai Petit born on 20 February 1990. She was Quaid’s wife and belongs to a business man’s family of Parsi community. Her grandfather, Dinshaw Maneckji Petit built cotton mills which was from the earliest mills in India. Quaid’s daughter name is Dina Wadia. In 1938 she married businessman Nusli Wadia who was an industrialist however she separated from him as marriage did not last long.

Paying homage to the Father of the Nation. Quaid e Azam chalked out Pakistan's basic principle of working to be what's compliant to Islam. pic.twitter.com/dZbZAdrxYg

How our Quaid got us Freedom

It was our Quaid who gave us concept of creation of Pakistan our home land. He got us freedom after establishing a political group for muslims called Muslim League. In an address to muslims of subcontinent he said that we have own civilization, culture, names, nomenclature, moral codes, customs and traditions; in short we have a distinct outlook of our life. According to international laws we are a separate nation.


Muslim-league had impacted very much on the politics of subcontinent and gathered muslims to give them their own country. This dream came true in the creation of Pakistan. Quaid-e-Azam played a big role in development of Pakistan and Pakistan came into being on 14th August 1947. He played role as first Governor-General of Pakistan and worked for the reforms and policies in Pakistan. He introduced respected legacy in Pakistan and according to Stanley Wolpert, Quaid is considered as greatest leader of Pakistan.
Shahbaz Sharif on twitter:

Heartiest congratulations to President Xi Jinping, Premier Li Keqiang & the people of China on their National Day. Peaceful rise of China is a factor of stability in the world. Pakistan further looks forward to strengthening its bond with her iron brother & an exemplary friend.

Illness and death of Quaid-e-Azam

From 1930, Quaid-e-Azam was suffering from tuberculosis. His few friends and his sister know only about the illness of Quaid. He did not tell his illness to anyone else because he knew that people will hurt by the knowledge of his illness. In 1938 he wrote a letter a letter to his supporter saying that there are irregularities upon my health. Mountbatten said many years later that if he knew about the illness of Quaid, he would avert partition. Fatima Jinnah said that in the hour of illness Quaid-e-Azam struggled hard to create Pakistan. He used to smoke much, 50 cigarettes a day for last 30 years which was a cause of his illness. He lived in house of Karachi during his last days of life where only Fatima Jinnah and servant were allowed only.