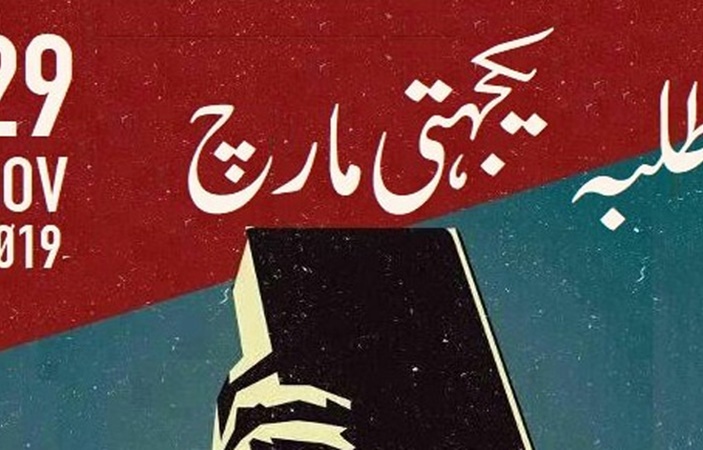 In the midst of fee hikes, harassment scandals and arrests from campuses, students across the country will come together for a Student Solidarity March on November 29 to demand better education and a fair academic environment.

"The reason we are forced to do this on the roads is [because of] an affidavit that every student has to sign before they get admission. Basically there is no ban on student unions but, through certain orders, restrictions are imposed so students will not take part in politics or hold protests on campus," explained Haider Kaleem, a journalism graduate from Beaconhouse National University, Lahore, who is among those organising the event.

One of the several demands of the march's participants, he said, was to lift restrictions that bar students from forming unions.
Kaleem, who is also the head of the Progressive Students' Federation (PRSF) and Progressive Students' Collective (PSC) — groups that advocate an open environment for students in order to promote critical thinking — said that the affidavit was also being challenged in the Lahore High Court but expressed little hope of the matter being resolved there.

We are marching against the system which labels us as "Terrorists" for demanding clean water on campus. Puts us behind bars for opposing dictatorship of administration on campus. We demand our right to exist with dignity.
Poster By: @jaquelintzin#StudentsSolidarityMarch pic.twitter.com/elAOh9MlY5

"It would be great if this demand is met after we raise it during our march but that is highly unlikely. For now we will challenge it in the Lahore High Court. We want to exhaust all the forums first before we approach the Supreme Court."

He said that though the march was getting more attention this year, this was not the first time it was being
held. Last year, a similar march was held in 16 different cities.
The organisers intend to replicate the mass protest this year as well and hope to rally students across Pakistan, including Gilgit-Baltistan and Azad Jammu and Kashmir.

Policing and curfews
Another demand of the Student Solidarity March's participants is to "put an end to unnecessary interference by security forces and the release of all arrested students involved in political activities".
While talking to Dawn.com, Kaleem addressed the presence of law enforcement agencies' officials on campuses and said that students, especially in Khyber Pakhtunkhwa universities, complain that they are subjected to unnecessary "policing" — which includes imposition of moral regulations as well — that limits their academic freedom.

"They argue that they are providing security. [In that case] Post them outside the gates, why are you allowing them inside the campus? We go there to study, but we can't even talk," he said, adding that such measures discourage critical thinking.

Don't just say 'I wish these students well' and 'I hope they are successful in their struggle.' Come out and stand with them on November 29th and help amplify their voices! #StudentsSolidarityMarch pic.twitter.com/7LRbXFqQjH

"You know what happened recently at Sindh University. Students were arrested over sedition charges for demanding water facilities," he pointed out and regretted that students were accused of "being anti-state" for making just demands.
Sidra Iqbal, a PSC student activist, also expressed concerns regarding the presence of security forces in universities in Balochistan.

The issue of recent fee hikes and budget cuts announced by the Higher Education Commission (HEC) will also be raised at the march. Students also demand that universities and hostels be equipped with basic facilities, such as transport, libraries, computers and internet etc, to facilitate the academic process.

In order to effectively prevent sexual harassment on campus, functional anti-harassment committees should be constituted, in accordance with HEC policy, and also have student representation.
Another demand is a singular education system, in order to ensure that students from all regions and social classes get equal future opportunities. In addition, they insist, unemployed students should be granted allowances until they find jobs.

Furthermore, university admission forms should either do away with gender sections or include an option for trans people.
The students also demand that in memory of Mashal Khan, who was lynched by a mob on April 13, 2017, a public holiday should be announced on the date.
"People should remember that this incident happened," Kaleem said.
While participants will raise the same issues across the country, Iqbal said that students from different cities will highlight concerns that are more prevalent in their respective areas. In Balochistan, she said, protesters will insist on the constitution of anti-harassment committees, non-militarisation of campuses and recovery of missing students.
The protest will also be joined by other groups, including Aurat March and Young Doctors Association.

Venues and routes
The march in Karachi, Quetta, Islamabad and Ghotki will be held outside the cities' press clubs on November 29, regional organisers said.
In Lahore, students will hold demonstrations outside the Punjab Assembly.
In Larkana, students will march from Tank Chowk to the press club, Sanaullah Aman, an organiser from Sindh said. In Jamshoro, participants of the march will walk from Sindh University to the city's press club, he added.

Muzammil Khan, who is organising marches in different parts of Balochistan, said that he aimed to arrange demonstrations in Turbat and Loralai as well. So far, however, it is not confirmed if the event will be held in those areas.