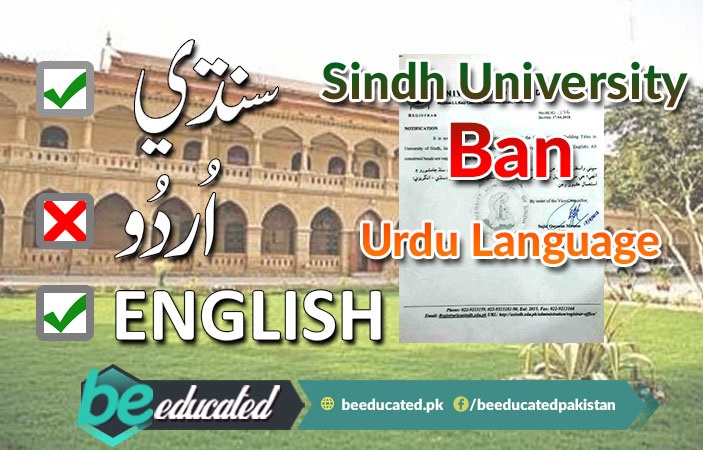 It will come as a shock to people of Pakistan that Sindh University has banned the use of Urdu language in their building titles and signboards. Vice Chancellor Sindh University Dr. Muhammad Burfat issued a notification earlier this week stating that all signboards and building names within Sindh University should only be written in English and Sindhi.

According to various sources, VC Sindh University said that he issued the notification because their university students understand Sindhi language better than Urdu, and that is why signboards and building names will be written in Sindhi. He also said he can never think of stopping the use of Urdu language within the university campuses.

But the issued notification stated: “It is notified for general information for all that the Signboards and Building Titles in University of Sindh, Jamshoro and all its Campuses shall be in bi-lingual format (Sindhi + English). All concerned heads are requested to take necessary action in this pursuit.” This statement indicates an unwritten ban imposed on Urdu Language in all campuses of Sindh University. 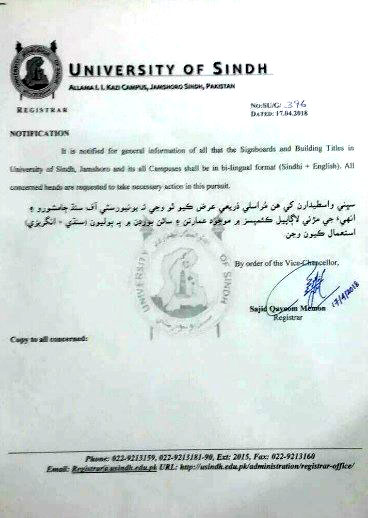 When SAMAA.TV asked about the matter from Abdul Qayyum Memon, the university registrar, he said that all the paperwork in University of Sindh is done in English and Sindhi because students can easily understand these two languages in comparison to Urdu.

BeEducated.pk posted this news to let people know that students in Sindh region are not taking the study of Urdu language seriously. Because of this they are unable to read and write Urdu as good as Sindhi and English. Hopefully, from now on schools will work hard on teaching Urdu language to their students in Sindh. Instead of putting a ban on the language because students find it hard to understand.

Students, Urdu language is our National Language. If you cannot understand your national language then learning other languages is pointless. All the developed countries focus on learning their national language first and foremost, because if they don’t give it any importance then no one else will either.

We should all try to learn and use Urdu language as much as possible. This is important for the progress of Pakistan while keeping our culture and traditions alive.