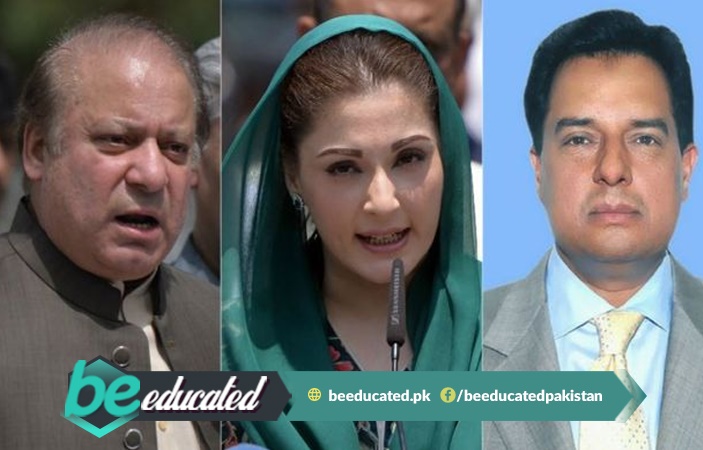 In Islamabad, the final decision Of Nawaz Shareef’s corruption case is going to be announced today on July 6, as the court complete the proceedings in the Avenfield reference against Sharif Family and reserved judgement in the case.

NOTE: BeEducated.pk wants you to know that the Final Verdict in the Avenfield case is out, where the Court finds the Sharif family guilty. According to news reports Nawaz Sharif has been sentenced for 10 years, while Mariam Nawaz has been sentenced to 7 years in jail. Also, Retired Captain Safdar (husband of Mariam Nawaz) will remain in jail for 1 year.

The Judge arrived at the Court around at 9:35am on July 2. He heard a request from Nawaz to postpone the final decree till next week. The Court reserved his decision for an hour. Nawaz Shareef has not mentioned a date for his return in his application. The lawyer also presented a medical certificate of Begum Kulsoom Nawaz dated July 3 before the hearing of court. Nawaz and Maryam have been in London since June 14 gravitate to Nawaz's wife Kulsoom, who is under medical consideration there. They had gone to spend Eid with Begum Kulsoom Nawaz. However, Begum Kulsoom suffered a cardiac arrest a day before her husband and daughter landed at London. She has been on ventilator at the Harley Street Clinic since June 14.


After the prosecution opposed any delay at such a tardy stage of the trial, the judge reserved his decision and adjourned the hearing for an hour.On the other hand, NAB requested the court to reject the appeal. If rejected, the decision will be announced right away and the Sharifs might be sent to jail. Nawaz Sharif, his daughter Maryam Nawaz Sharif and son-in-law Captain Safdar are also accused in the case. His sons, Hussain Nawaz and Hassan Nawaz, have been also declared as offenders.

Politicians and Other People Talks About The Nawaz’s Trail

“Unfortunately, our liberals could not find any democratic leader other than Nawaz Sharif,” said analyst Adnan Adil. According to him, Mr Sharif took advantage of that. “He is exploiting the freedom of media as well as social media and portraying himself as a victim,” he said.