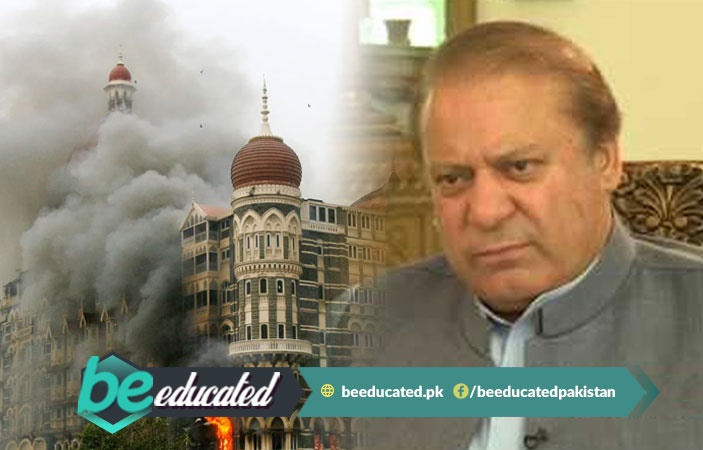 On Friday May 12 in Multan, Nawaz Sharif Ex-Prime Minister said in an interview with Dawn News that “Militant organizations are active. Call them non-state actors, should we allow them to cross the border and kill 150 people in Mumbai? Explain it to me. Why can’t we complete the trial?” - a reference to the Mumbai attack-related trials that have stalled in a Rawalpindi anti-terrorism court.

BeEducated.pk is posting this news because in the light of this statement, anyone can assume he meant to say there are numerous terrorist organization active in Pakistan and should we send them to Mumbai to kill people? He also mentioned the Mumbai Attack trials that have not reached any verdict because we don’t want them to be solved.

Mumbai Attack occurred in November 2008, it is also known as attack of 26/11. 166 People died in this attack. According to Indian official, it was done by an organization known as Lashkar e Taiba that is based in Pakistan.

During a press conference, Indian media reported that the Indian Defense Minister said it was a serious disclosure, this statement from Nawaz Sharif is supported by the Indian motive that the Mumbai attack was carried out from Pakistan, we believe that Pakistan is responsible for the attack and our aim on this matter has proved true.

INDIAN Media is constantly blaming Pakistan for the Attack of Mumbai 2008. India just got another chance to frame Pakistan unjustly and call Pakistan a terrorist organization. According to Indian media Ex-Prime Minister confessed because he was angry over his dismissal from his position. That’s the reason he confessed by giving this statement. He also added that strict action should be taken against Nawaz Sharif.

"What did I say that was wrong in the interview?" 68 years old Nawaz Sharif asked while talking to reporters outside the court in Islamabad, where he is facing corruption charges.

According to the National Security Council's statement, it was recalled during the meeting that the delay in conclusion of Mumbai attack case was caused by India, not Pakistan. "Besides many other refusals during the investigation, the denial of access to the principal accused, Ajmal Kasab Khan, and his extraordinarily hurried execution became the core impediment in the finalization of the trial," They said.

Meanwhile the announcement of the National Security Committee meeting with the Prime Minister was issued. The meeting participants unanimously rejected the allegations, it is unfortunate to establish opinions based on false concepts and to get facts out of fact. The National Security Committee agreed that Nawaz Sharif's statement about Mumbai attacks is wrong and misleading.

The participants said that Pakistan is not responsible for the delay in the Mumbai attack trials but India, because they are responsible for delaying access to Ajmal Kasab Khan and his execution, due to which the case could not be completed.

While condemning Nawaz Sharif's false claims and allegations in the press conference, the meeting said that Pakistan will continue to play in the fight against terrorism. For more news keep on visiting our website on daily basis.