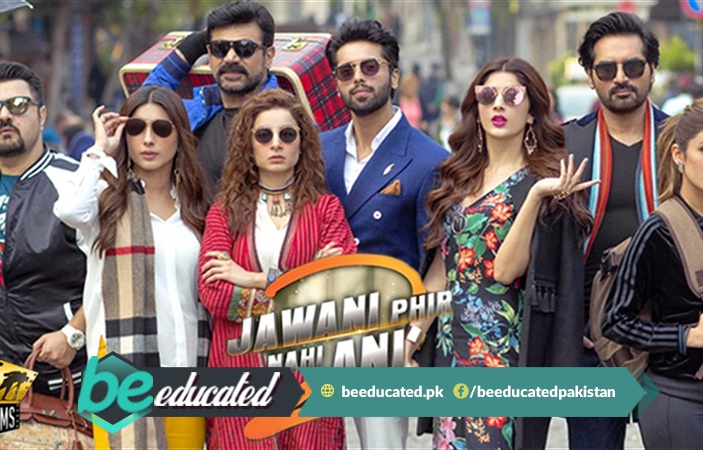 Trailer of the most awaited Pakistani movie Jawani Phir Nahi Ani 2 has been released. Fans are extremely excited to watch the sequel of Jawani Phir Nhi Ani, one of the highest grossing movies of Pakistan, and the good news is that its trailer is out now.

The second part in the movie franchise has a star cast including Fahad Mustafa, Mawra Hocane and Kubra Khan in lead roles. While Ahmed Ali Butt, Vasay Chaudhry, Humayun Saeed, Sarwat Gillani and Uzma Khan are actors and actresses from the first movie that will play main roles in the latest part. Also Sohail Ahmed, Safina Behroz, Shezad Khan, Kunika Lall, Kanwaljit Singh and Omer Shahzad will be seen in supporting roles in the film.

Jawani Phir Nahi Ani 2 plot revolves around the lives of four men that is jam packed with comedy and drama. The movie is shot at various exotic and beautiful locations, some of which are in Turkey and Dubai. So, the audience can expect it to be a great movie experience for the whole family.

The actor and producer of JPNA 2, Hamayun Saeed said, “We have left no stone unturned to make this movie bigger and better in terms of production. The whole cast has also put in their best efforts, which the audiences will be able to judge through the trailer.”

Also Nadeem Baig, the director of this film, explained, “This movie is made on a much larger canvas than the first installment and each and every actor has put their heart and soul to make the movie shine.” He added, “Hoping for the best!”

Public Has Mix Reactions to the JPNA 2 Trailer

For some people the trailer did not live up to their expectations. According to news reports, people thought were was a lot wrong with the trailer as comic dialogues felt forced and out of place. While the trailer should have given a teaser, by the end audience already knows too much about the film. As there is lots going on in the trailer, many people thought it was best not to reveal so much of the story.

However, Pakistani movie fans are looking forward to see Fahad Mustafa acting alongside Humayun Saeed on the silver screen. As JPNA 2 is going to be released on Eid ul Azha, thus we can expect cinemas will be filled with movie fans to support Pakistani film industry. For more news and updates keep visiting our website as much as possible.