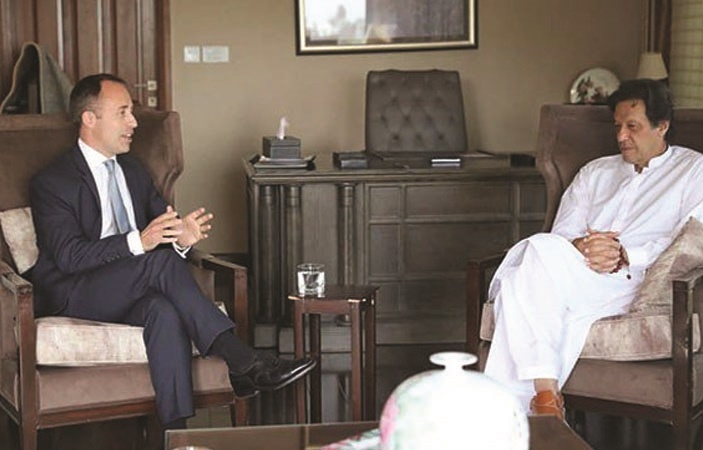 Chairman of the Pakistan Tehreek-e-Insaf Imran Khan has said that we are committed to return all the money to the country, which was transferred to the UK through Money Laundering during the PML(N) government.

According to a tweet on PTI’s official Twitter account, British High Commissioner Thomas Drew congratulated Chairman Tehreek-e-Insaf Imran Khan on the success in 2018 elections after visiting him at Bani Gala.

The British High Commissioner said that Imran Khan’s victory speech has left a very positive impact on Britain and its people. Thus, the British government is ready to fully support the government of Tehreek-e-Insaf (PTI) in Pakistan.

Thomas Drew said that the British Government will help Pakistani government to send 22 lakh children to school because they cannot gain education due to poverty or other circumstances, and the British government is ready to cooperate with the government of Tehreek-e-Insaf in all other fields as well.
Imran Khan thanked the British government for the greetings and good wishes, saying that Pak-UK relations are very important, a number of Pakistanis are living in the UK while we are planning to get all the money back that was laundered to the United Kingdom under the previous government.

Pakistan One of Main Countries to Launder Money in UK

BeEducated.pk found out that according to an analysis report of National Crime Agency (NCA), Pakistan was identified as one of the three main countries to launder money in the United Kingdom.

NCA found through its analysis that Britain has become a favourite destination for corrupt politicians to invest their laundered funds and one of those countries was Pakistan among two others, which are Nigeria and Russia.

The agency discovered that a small group of people, which include accountants, estate agents and service providers are helping such corrupt individuals in laundering their money in the UK. For more political news and details keep visiting our website on daily basis.