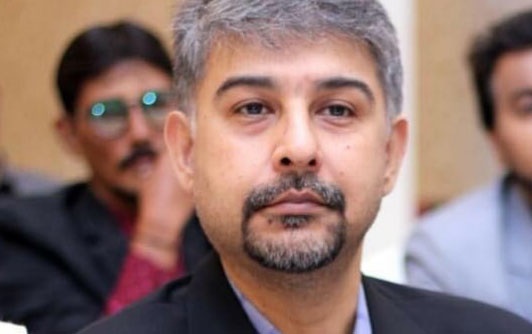 Muttahida Quomi Movement (MQM) leader, Syed Ali Raza Abidi funeral prayers were offered and he was buried in graveyard of DHA Phase IV. Many political leaders, Abidi’s family members and friends were present at funeral.Syed Ali Raza Abidi was killed in front of his house and two persons killed him on Tuesday night.
PTI official on twitter:

Security was tight at funeral prayers and rangers was also deployed there near graveyard Yasrab Imam Bargh. Bomb disposal squad also came there and cleared the area of Imam Bargah after sweeping completely. Politial leader Shehryar Afridi has said that we shall not compromise on peace of Karachi.

"Prime minister Imran Khan and president of Pakistan, Arif Alvi have expressed grieves over killing of Abidi and has said authorities to investigate. They both have sent their condolence messages to Abidi’s family."

Chairman Pakistan Peoples Party (PPP), Bilawal Bhutto Zardari has also condemned killing of Abidi. He has said to Sindh Government to arrest the culprits involved in this murder.

Sindh Chief Minister, Murad Ali Shah has also condemned the murder. He has offered his condolence to Abidi’s family. He has ordered police and rangers to cope with unpleasant situation related this case.
Shehryar Afridi on twitter​:

I am deeply saddened with the untimely demise of our dear colleague and brother, Ali Raza Abadi. May his soul rest in peace and give solace to his family and friends.
All efforts will be put in place to ensure that killers are brought to justice IA.