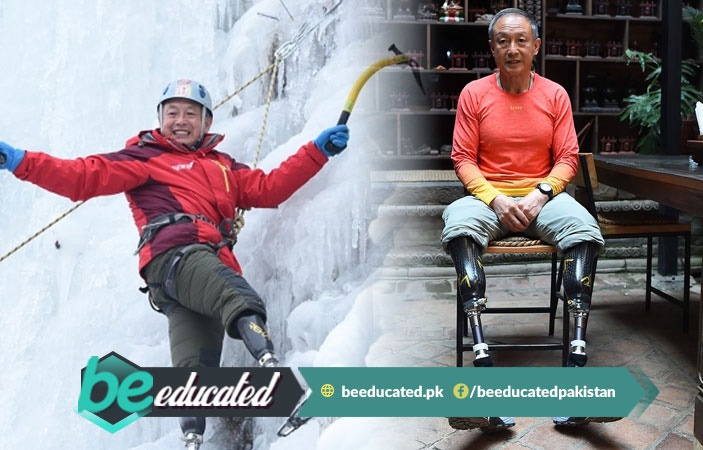 In Nepal, a 69 years old handicapped Chinese climbed to the top of Mount Everest even after losing both of his legs 40 years ago. Chinese Climber Xia Boyu has set a new example of courage and determination.

BeEducated.pk wants you to know that forty years ago when he tried to head to the peak of Mount Everest, he lost both of his legs due to extreme frostbite. Because doctors decided to cut both his feet to save him. But Xia Boyu’s madness for climbing didn’t end and finally he succeeded at his fifth attempt. This is how, at the age of 69, he became the first disabled person to climb the Everest.

Story of the Passionate Mountain Climber

In 1975 Xia Boyu, was 250 meters away from the top of Everest when the weather worsened and took 2 to 3 days to become normal. So, he came back because he didn’t want to get stuck in the snow and lose his life. While coming down Xia Boyu gave his sleeping bag to a friend whose bag was torn apart. Due to this selfless act, both his legs were buried in the snow and got frostbitten.

Then in 1996 Xia became a victim of Lymphoma, which is a kind of blood cancer. That’s the second time his legs were cut in places. This time his legs were trimmed from the upper part of knees. It was a difficult phase for Xia Boyu as he lost his courage to go mountain climbing. But with the passage of time his passion grew stronger.

After losing both his legs, he started to train after 20 years. In 2014, he once again started climbing the Mount Everest but due to severe weather conditions he had to stop and come back. In 2016, he tried for the third time but an ice storm pushed his group away when they were only 100 meters away.

But Xia didn’t give up as he wanted to climb Everest again in 2017. But later on he came to know that Nepali Government has prohibited physically disabled people from climbing the Everest. However, in the end Nepali Government accepted his contradictory decision. Thus, Xia Bo Yu reached its peak in the fifth attempt and made his name go down in history.

There are handicapped people in Pakistan. Recently, we heard about Abdullah who was born without both arms but he studies and plays like any other child. Hopefully, more people will come forward and show determination like Xia and Abdullah to make this world a better place. For more news keep visiting this website as much as possible.