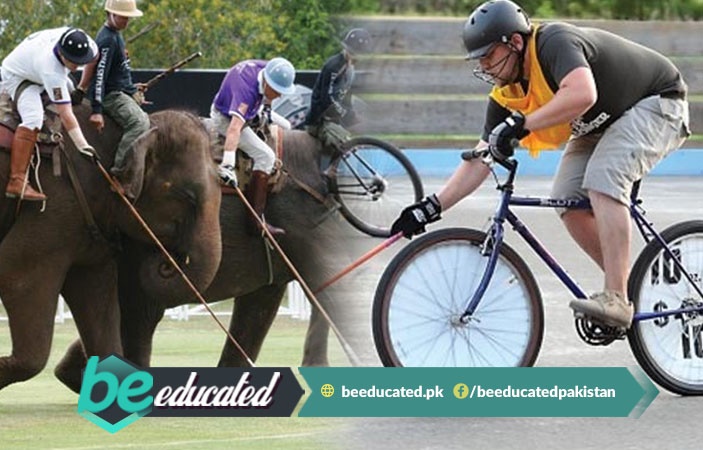 "Polo" is a cookie style in which two teams of horse riders take part. This game was played on the horse till the 19th century but Later, its other types of inventions include water polo, ice polo, elephant polo, bicycle polo and bike polo. As "Gadaha polo" is also known in the northern areas of Pakistan. It is called the "Gordodh Ghal" in the local language. Ordinary children take part in the game and play polo while riding a donkey without having enough skills. In our country, Harbor Polo tournament is often more frequent, but Alfred Polo (Elephant and Cycle Polo's game probably is a stranger to a populous massacre. 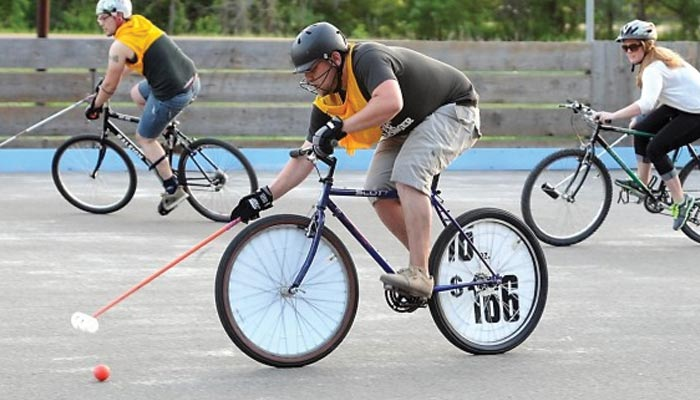 Bicycle polo is played on the bicycle instead sitting on the horse. Officially its field is 150 meters long. While non-governmental sports, its length ranges from 120 to 150 meters when the width is 80 to 100 meters. The game uses an inch diameter ball. When the stack length is 3 meters. The team consists of 6 players, out of which 4 players play in the field, while the remaining two players wait for their alternatives. The game's duration consists of 30 minutes, which contain two half-time.

The first cycle polo watch was played in 1891. The game reached the United Kingdom and America at the end of the 19th century. This game was played at the American style cycling. The first international match was held between Britain and Ireland in 1901.

The World Organization announced the sporting official status. In Pakistan its matches are held but it is not popular like horse polo. In 2005, Pakistan Cycle Polo team went to India to play a series of 6 matches. In Amritsar, there was a competition between the two countries, in which India won the series by defeating Pakistan. 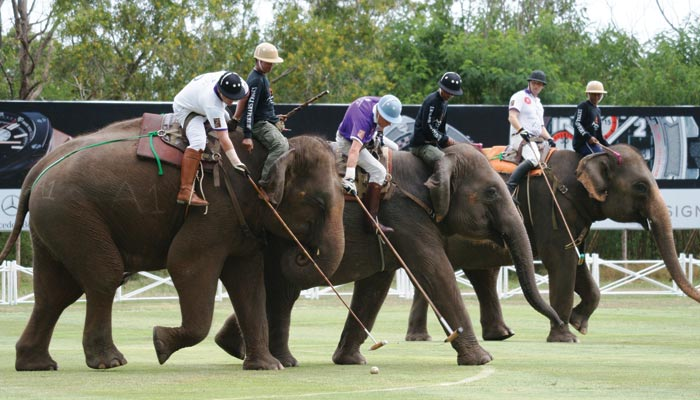 Elephant Polo, a Horse Polo style game, played by a strong mountain animal on the back of elephant. The start of the game happened in India in the twenty-two century. However, the modern shape was found at Nepal's position. This style of sport is popular in Nepal, Sri Lanka, Thailand and Rajasthan, India. Sri Lankans holds its annual tournament in the city. Elephant Polo's Ground, Half-Polo is three-quarters smaller.

The length of the field is 140 meters and width 70 meters. Each team consists of three elephants in the game. A player rides on only one elephant. The Elephant runs to the left and forth on  the commands of player. The player has 6 to 10 feet long wood rods. The elevation polo ball is also made strong and standard, and it is not affected by the squeezing.

The game mentioned consists of two halves of ten minutes, namely "Chakkar". Both halves are given a break of 15 minutes so that players and elephants can be both get refresh. There is a half-square diameter of 10 meters between the field where the game refers to the game by throwing the ball in the circle. The D of the field is 20 meters, half diameter, and there are round posts on either side of the field, where the wing ball attempts to throw in the net.

In 1982, the World Alliance Polo Association consisting of teams of various countries was formed. A Singapore tourism company, which was located in Tiger Top, has organized a regular global tournament organized by the Global Elephant Polo Federation, and near the British border near Meghali Chattani airline near the northwest of Kathmandu. World Tournament is held every year.

In Sri Lanka every year, tournament is held on February 15, in which players of the "Elephant Polo" from around the world participate. Elephant Polo game is popular in Jaipur in Rajasthan city, and Jaipur is the only city in the world where all year tourism is organized by the tourism on Elephant Polo tournament at the Elephant Festival in Chigangan Stadium.