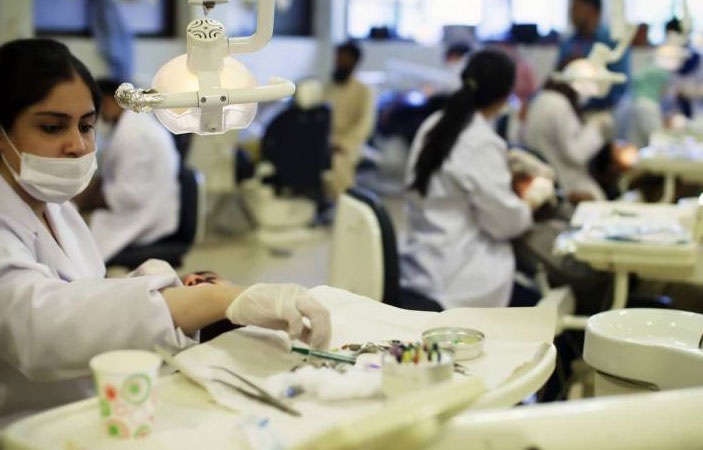 ISLAMABAD: The Pakistan Medical and Dental Council (PMDC) agreed over the principle to increase the fees of private medical colleges over the specific condition, on Monday.

These private sectors are have been informed that fees cannot be increased more than 8 lakhs if the admissions are guarantee upon merit.
On the other hand the management of the private medical institutes have claimed that according to the annual index, fee of every student should be increase from Rs 642,000 to Rs 1.3 million.

Whereas the council has decided that the fee will not increase more than 8 lakh and they have hired an audit firm to calculate the expenditures of colleges.

Dr Shabir Lehri president of PMDC told the media after presiding the meeting of council, that the Supreme Court in 2010 had taken the notice of the issue in fee of medical colleges after which now it has been decided that the fee of every student would be Rs 5, 50,000 which will increase to seven percent annually.

Whereas the fee was increased to Rs 6, 42,000 in 2013 and now the council is trying not to increase fee further, because some of the private medical sectors are not coping with the promises that they made. For which the council had got many complaints about the bribery that the private sectors are demanding in their institutes on the name of donations during admissions, he added.

He further added in his statements that if these institutes are wishing to increase fee then they have to certify clearness, quality of education, merit and as well as facilities for the aspirants and the institutes mutual social responsibilities.

He also claimed in his talk that in 2012 an obligatory regulation was made in which it was clarified for the private institutes that they will provide free education to five percent aspirants but for now, a large number of colleges are violating this rule.

He further added “Mainly we are paying attention on merit and just capable aspirants should be admitted into medical institutes. So we have recommended that all the medical institutes display a list of their candidates on its official website and also the list of shortlisted aspirants after the admissions. Further, the colleges can demand post-dated cheques from the aspirants when they are applying for admissions”.

So as these private medical institutes will increase the fees to Rs 1.3 million an audit firm will determine the expenditures of governments and as well as private sector medical colleges. For which these colleges would be required to submit an affidavit claiming not to break up the terms and regulation on such conditions and they will be required to implement this for the upcoming year of admissions. So those institutes who will submit the affidavits will be considered for the increase in fee said by Lehri.