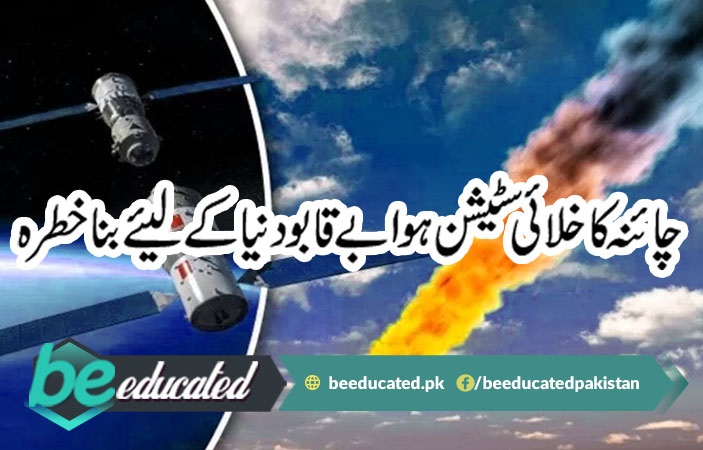 Tiangong-1, a Chinese Space Station is now falling to Earth. China Space Agency gave no clear explanations on how they lost control of their space station.

Until it went offline, the Chinese space station was supposed to be brought back to Earth through a controlled way of landing.

According to the European and Chinese Space Agencies, it’s predicted to crash in the late hours of Sunday (April 1) or earlier today (April 2). On recent updates the falling space station of China can crash anywhere. Because it is falling towards Earth in an unpredictable trajectory.

It was launched in 2012, and after five successful years of operating it went out of China’s control. It was an experimental platform through which China planned to learn and develop its future space stations.

According to the space experts the falling space station will turn towards Earth between 5:30 AM (PST) and 2:00 PM (PST) today.

The Chinese falling space station weighs between 8.5-9.5 tons. Based on its size, only 10% of the space station will remain after burning up as it re-enters into the Earth’s atmosphere.

The chances of the falling space station (or its broken parts) hitting people is predicted as less than one in a trillion. There are harmful chemicals on the board of space station but all the space agencies are assuring through their reports that nothing bad will happen even if it reaches Earth’s surface.

BeEducated.pk hopes that this out of control space station doesn’t do any harm to any country. Such accidents can happen to anyone. We should always look towards the brighter side of things.

There are many space shuttles/satellites that have been launched in the past years and they are still orbiting our Earth. As soon as these satellites come close to the Earth’s atmosphere the gravity pulls them towards it.

The space agencies should think about the ways of reducing the various (operational and non-operational) satellites orbiting our Earth.

For now, as space experts have reported the debris (broken parts) of Tiangong-1 are harmless. We should all remain hopeful that it will not crash in the surroundings of a populated area.