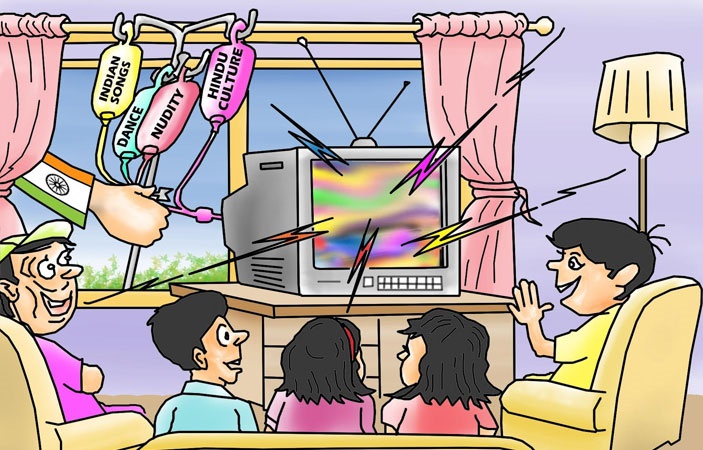 Sadly, we all know that the information that is being flown to us through several demonstrating media sources are all interpret through the super-power of United States and through our not so good neighbors India to Pakistan. Such countries are just trying to impose their culture through media war in Pakistan. Undoubtedly, in some manners they seems to be won this war. They have taken this petition of war in their name under the banner of globalization. The term “Globalization” apart from economic and technological aspect has been widened in it “dimensions of broader politics and culture”.


Either you like or dislike the fact, everybody seems to have stake in its meaning, believe me or not, we are affected through its practices and discourses by means of in and out. Back in 2002, when former general Musharraf in March, decided to set Pakistan Electronic Media Regulatory Authority with a view to regulate electronic media growth in the private sector. In this way our private channels played the role of globalization agents.

Regarding the impact of globalization it is considered inevitable, and irreversible and beneficial. No doubt it is creating a fear that lead to inequality between nations.

Regarding Pakistan’s views it is terminating inequality of nations, that is incredibly depend upon the dominancy of few and subordination of many.
The American lobby and India is playing a role of monopoly while embedding their culture to invade our culture through the liberal democracy as understood in Pakistan as westernization.

The free flow of information is misused by the powerful nations thus this process has become unidirectional gateway to India and America mass media for entering in Pakistan.

These forces are using international power relations for emerging their school of thoughts and interest in our country. Their main strategy is to impose and penetrate their culture and values through mass media into our culture. As all knew that their ethics, norms, and values are much different regarding religion they practice and so are their rules and regulations same like them our worshipping style is different and so our style of practicing the religion is different.

Undoubtedly, to some instance we have become victims of such invasions and have lose to extended level. We have become too much addicted to them that we rarely see them not being followed. For example Indian Music and American Music, western dressing styles and yes many customs are being adopted through them like bridal shower, Mehndi (henna) ceremony, dances on events and many more to embark.

This kinds of intrusions are taken place through free flow of information. The exporters of foreign media as foreign culture is unobtrusively exploding in Pakistan. All these are things can be measured safely if PEMRA regulate the flow of information restrictedly.

But media is working as biased stuff and on grounds of it, supports monopoly or power relations. Through this law of authority of mass media the invasion of culture has taken place in Pakistan.  This could only be controlled on the condition if policies of Pakistan could utilize the two-way flow through gateway.