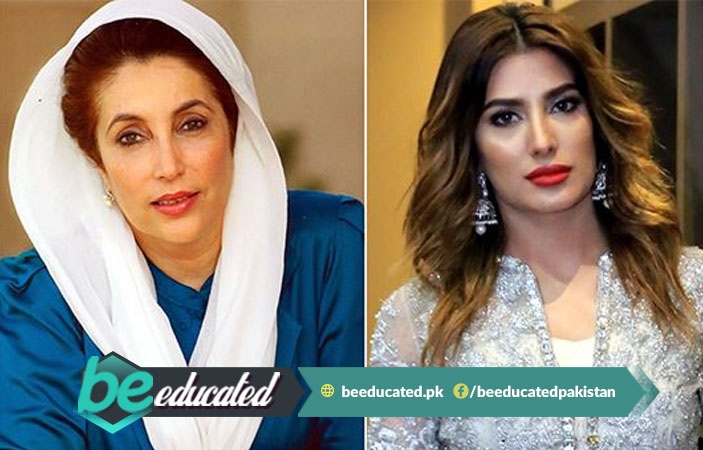 Actress Mehwish Hayat has confirmed to play the lead role in the film made on the life of former Pakistani Prime Minister Benazir Bhutto.

Mehwish Hayat Has Accepted to Play the role of Benazir Bhutto

Earlier this year, social media was circulating the news of a film being made on the life of former Pakistani Prime Minister Shaheed Ms. Benazir Bhutto, while it was also said that Mehwish Hayat will play the role of Benazir Button in the biopic. But Mehwish Hayat did not show any response to these reports, however, BeEducated.pk has found out that now she has confirmed the news.

The actress has posted a long and detailed post on Instagram, through which she confirmed that she is working on the film made on the life of Ms. Benazir Bhutto.

In her post she said that it is the ideal time to go over the achievements of martyred Benazir Bhutto on the occasion of her 65th birthday (on June 21). Hayat wrote that she is not a very political person herself but even then she cannot deny Benzair Bhutto’s efforts for women empowerment and equality in the country. She mentioned that there was a time when women believed they could do anything, only because Benazir Bhutto inspired them to make anything possible and reach for the stars.

Hayat explained in her Instagram post that she feels privileged to have been offered the opportunity to learn more about the life of the first female prime minister of Pakistan. Mehwish Hayat wrote that if she had not lost her life in the tragic incident in 2007, Benazir Bhutto could have accomplished so much more but we can only think about it and never really know.

The famous actress also wrote, “The sign of a true leader is the legacy they leave behind and the reverence with which the people remember her irrespective of party allegiances.” Therefore, Mehwish Hayat will try her best to do justice to her role and bring life to Benazir’s portrayal in the movie. To read more interesting news keep visiting our website on daily basis.