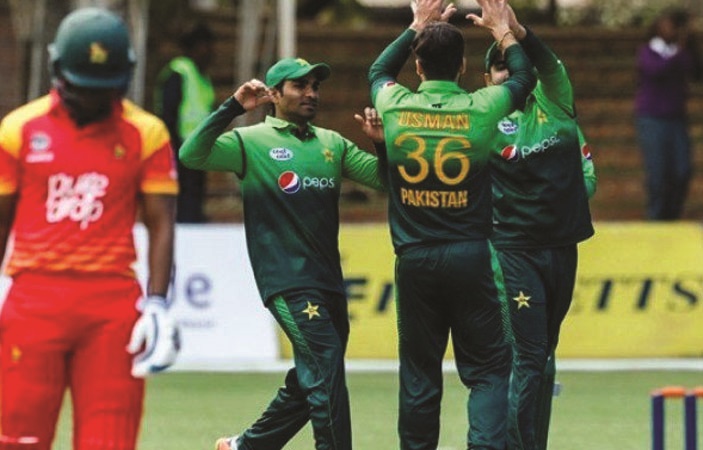 In Bulawayo, Pakistan defeats Zimbabwe in the fifth One-Day by making a clean sweep in the series.

BeEducated.pk wants you to know that Pakistan scored 365 runs in the final match of One-Day Internationals played in Bulawayo, Zimbabwe squad just made only 233 runs and lost 4 wickets. The national team won the match with the margin of 131 runs.

Zimbabwe opened for 66 runs in 14 overs to pursue the big target, Captain Hamilton Masakidza made 34 runs, while Hassan Ali took his wicket. In the next over Tinashe Kamunhukamwe scored 34 runs and was caught off by Imam-Ul-Haq on the ball of Muhammad Nawaz.

Prince Masvaure made 39 runs and Ryan Murray scored 47 runs, while Peter Moor 44 and Elton Chigumbura scored 25 runs and remained on the pitch until the last ball.

Hassan Ali and Mohammad Nawaz took 2 wickets, Babar Azam was rewarded as Man of the match, while Fakhar Zaman was given the man of the series award.

Earlier, Green Shirts decided to bat against Zimbabwe, then the national team started the innings. Fakhar Zaman and Imam ul Haq played tremendously, both the opener once again performed a wonderful game and scored 168 runs.

Opener Fakhar Zaman proudly played the innings and scored 85 runs, but he was unable to complete his century. Imam ul Haq also performed a very good game and completed the innings with 110 runs. After opener's outfit, Babar Azam, who came on one down, took aggressive style and completed 106 runs, while Pakistan made 364 runs in the fixed overs.

In the fourth one-day of the series, the national team had given Zimbabwe a 400-run target, Fakhar Zaman scored a double century and Imam-ul-Haq and Fakhar Zaman set a record of ODI’s Highest Opening Partnership. To get latest sports news keep visiting our platform as much as possible.